VMware announced much as a surprise at May 11 Project Enzo, a future solution which is a hybrid cloud platform enabling very fast, simplified  and cost effective delivery of applications and virtual desktops.

Think of Project Enzo as an extension of EVO:RACK but specifically designed for VDI. It delivers the same simplicity of deployment. No more manual and time consuming installation of  servers, connecting to storage, installing vCenter, ESXi hosts, Horizon, etc etc.

Project Enzo  will enable customers to deploy from zero to 2000 virtual desktops on their on-premises hyper-converged in about 20 minutes.

The architecture of Project Enzo consists of three layers:

This is a good video explaining Project Enzo

Project Enzo enables a very quick and easy deployment. While details are not released it looks like this:

Applications and desktops can be moved from on-premises appliances to Horizon Air and back with a few clicks on a button. Cloud can be used in scenarios when additional capacity is needed (seasonal workers) or for disaster recovery.

The deployment is explained in this video

The scale of Enzo is not known. The video talks about 2000 virtual desktops running on 8 nodes. 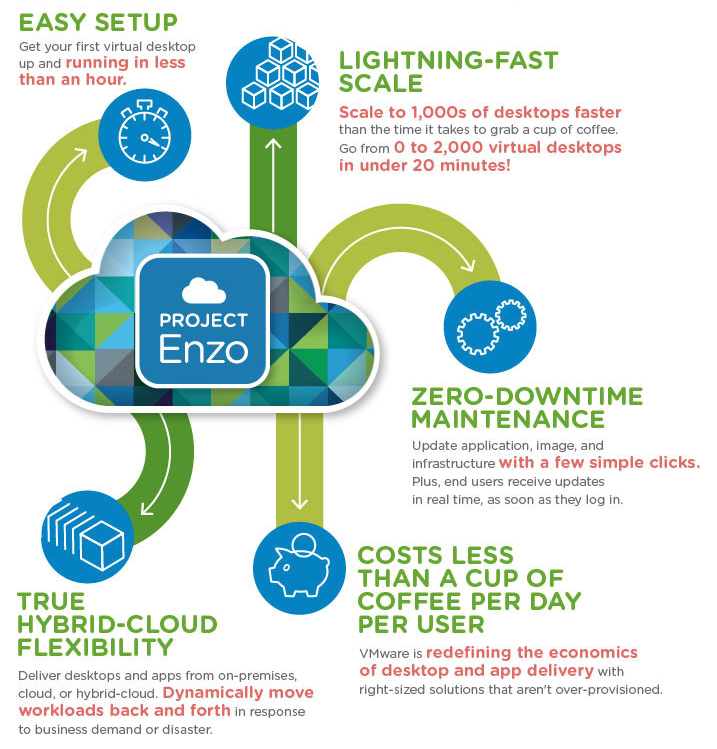